I found out on a Saturday. Which was great cause my husband works weekends so I had the house to myself. I gave myself Sunday to feel my feelings. Well, my complete numbness, and decided to tell my husband on Monday, after he came home from work.

I prepared a scavenger hunt starting at the front door all the way to me in the bedroom. This is something I’ve done for him over the years ever since our first Valentine’s Day when he still lived in Key West and I lived in Miami. It always started with a bouquet of croquetas in the microwave, followed by a few stops in our home, and ended in the bedroom. It wouldn’t be a giveaway that something was up if he arrived to a scavenger hunt on this Monday.

Despite my numbness, I knew I wanted this news to feel special for him. He deserves all the happiness this news should bring.

He peeked into the bedroom and saw me holding a note which led to a different last stop than he was expecting. This time the scavenger hunt ended on the dresser where I had placed the digital pregnancy test inside a little brown box.

He opened the box and saw the test.

He held me tightly for a long while running his hands soothingly up and down my back.

He was elated. As expected. He’s always wanted children and knew I never did long before we got married. But always held out hope.

He kissed and hugged me and said “I’ve been seeing baby things everywhere all weekend! It’s like the universe was preparing me!” He asked “how do you feel?“ probably noticing I wasn’t the expected crying, joyful new mom. I attempted to smile back in response. I still didn’t have the words to explain how I felt.

He kneeled before me as I sat at the edge of the bed watching him smiling and reading the pregnancy test over and over again.

“Are you excited?” he asked.

He leaned into me and hugged me. He whispered in my ear “That’s ok. It’s ok”

His words sunk deeply into me.

It’s ok that I’m not excited?

It’s ok that I’m not excited.

He held me tightly for a long while running his hands soothingly up and down my back.

This man is God’s gift to me. The greatest one yet.

He stayed this way with me for a long while, just running his hands up and down my back. I stayed in the safety of his embrace and after a few more moments I heard my voice say “I’m scared. I’m so scared.”

That’s when I realized it wasn’t numbness that I’d been feeling. It was fear. Paralyzing fear unlike any I had ever felt before.

I’m not a fearful person. I opened a business at 18 years old. I interviewed Carlos Vives at 16. I performed at the Carl Marx Theater in Cuba on national television at 6 years old. I never felt fear. Not like this. Nerves, some tension, sure. But fear was unknown to me in my nearly 37 years of doing really amazing things.

I’m also a planner. And a really fucking good one at that. I’ve never planned anything that didn’t go amazing. Sure, some curveballs happen, but I even plan for those margins of error.

All the transitions I’ve planned in life have been amazing. Including my departure from corporate after 20 years in media on the same year that I paid off my dream wedding and bought my first property. It was hard. But I planned. It was amazing and then I danced under the full moon at the edge of the ocean to celebrate with this man who now held me in the safety of his embrace until my thoughts, self judgement, and tension finally quieted and allowed to feel.

This, getting pregnant now, was not what I planned. I planned to REVISIT the idea of motherhood and decide if I even WANTED to change my mind about it in January. JANUARY!

And I have no plan.

But in this window of time, in these past 3 days since this curveball, since I found myself in a margin of error for which I’d never planned, I’ve learned two things.

I’m Afraid My Heart May Not be Big Enough

How to Choose Between Natural and Hospital Births 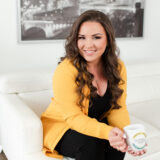 Media Personality, CEO of Seizing Happy, host of the Chats with GiGi Podcast